Click On The SAMURI Logo Above To Visit Spike Anderson's Official Web Site.


Meet "Big Sam",
A Z Car That Has Been Both
Road Raced and Rallied

by: Mr. Nick Howell
html as of 9 July. 99....cjb
See Hyper-links at bottom of page for more information about "Big Sam".


Mr. Nick Howell of Penzance, Cornwall, England is the proud owner of "Big Sam" today. Below, he tells us how he came to own this historic race car and what it took to restore it to its original racing condition. 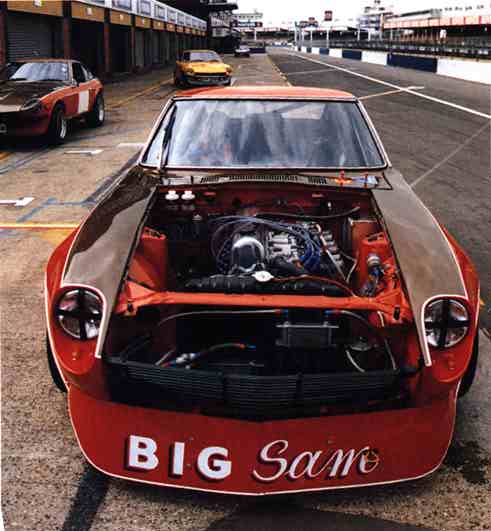 I used to watch Sam Racing on the tracks when I was a teenager and it was such fun seeing this old Datsun, fielded by a small independent team, on an absolute shoestring budget, just run all over the factory works teams.

So when a friend of mine, Tim Riley who prepares race/rally cars and Model A Ford's asked me if I knew of a car called "Big Sam" as it was up for sale, I off course jumped at it. Price was a bit high but within reach and it was in a bit of a state. It had been converted for use by Martin Sharpe, who had lost the use of his right leg in a motorcycle accident, so the car had been fitted with hand controls. It had not been used for about ten years. The chassis number and history checked out, so the old heart completely ruled the head, and I lept in with both feet.

After buying it, I thought we better check out the chassis straightness so asked Francis Tuthill to look at it. Fran prepares all the World rally Championship cars for Prodrive (Subaru, Seat, BMW).

When Fran first saw the car, complete, he said, "What makes you think this has done a Safari?" I told him to look undermeath. "Dear dear, you think this has done one or two?" It was very dented and bashed about and I wanted to retain all this on the rebuild as it is part of the cars history so we agreed to strip it and set the shell up on a jig. One chassis leg was 3/4 " out of true so we straightened that, and the nearside passenger foor was too far gone so we replaced it, but the rest was fine.

The rebuild took an awful lot of cash and time (dare I say over $70,000 and seven months) and as Sam was the only works 240Z to go on the track, we decided to keep it in its race trim. Along with the car came countless rally bits-struts, wheels, spare engine, Mikuni carbs etc.

The engine now fitted is not the original rally one, but it pushes out 265 bhp at 7000 rpm. Peak revs are 9000. Won't tell you how we did that! It has a five speed, "dogleg" gearbox and the later, stronger differential. All up weight is 914 kgs (2015lbs) and, the most important bit, the difference in corner weights is down to 2lbs. If you have a well set up, stiff race car this is what makes the handling good.

First race that I did was (DATE?) Silverstone in a Bentley Drivers Club meeting. It was an "allcomers race" so there was a selection of cars. Though in practice I was 0.2 sec quicker than a Lister Jaguar, I was put on row twelve and the Lister on row 2. When I queried this with the organisers, terrible British Chaps, they said "That will teach you to bring a Japanese car to the Bentley Drivers Club Meeting!" So in the race I just had lots of fun going up through the field. Did not win, but after the race Aiden Mill-Thomas, who was in his race Cobra, came up and said "What the *#@*^!! is under the bonnet of that Datsun!!!!"