This section is intended to give you a some information related to the Datsun / Nissan Z Cars - as they were provided by Nissan USA and used as " Offical Pace Cars " at some of the Speedways and Racing Events held around America. I have included the 1985 Nissan MID 4 because most of us consider it a "Z Prototype".

If you have an interest in this subject area, have special knowledge related to these cars, their drivers or the people that built them, please contribute it. We can put hyper-links in for any additional explainations, information or special interest articals.

Pictured below: as far as I know from my research to date, is the first Z Car that was used as the "Official Pace Car" for a major racing event in America, the 1972 USAC California 500 Championship.

Pictured below,Here Mr. Katayama is presenting the keys to the Datsun 240-Z Pace Car to Mr. John Cooper, President of Ontario Motor Speedway. This 1972 240-Z was to be used as the Official Pace Car for the Third Annual " California 500" held on Sept. 3, 1972. This Z was used to pace the 33 USAC Championship Cars around the O. M. S. 2.5 mile oval track. 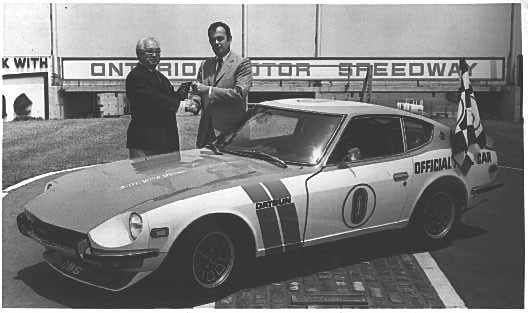 Twins? - It was standard practice to build two " Official Pace Cars " for an event. One would be used for promotional purposes. It would be driven around town, used for photo sessions and then presented to the winner of the race. A second car would be prepared to actually " Pace " the race. This second car usually would have it's suspension and power train modified for higher performance, to assure that it could preform the on-track functions of a Pace Car. (that is to keep ahead of the pack of cars it was pacing ). Having thus been modified, it could no longer be Smog Certified for use on the highways. Thus the need of having one for "Show" and one for "GO"

We believe that the car pictured above was the actual Pace Car because it has the built in " Checkered Flag Holders " and is missing its hood oraniment. 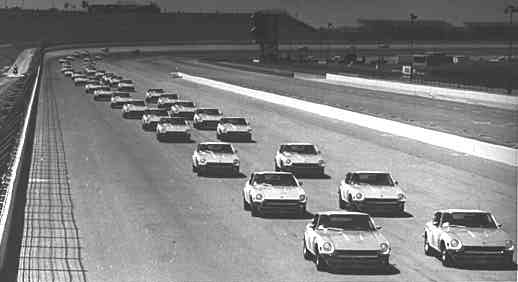 To date We Have Found Only Two Of The Fifty Duplicate 240-Z O.M.S. Pace Cars. However Les Cannaday at Classic Datsun Motorsports believe has the car prepared for track duties for 1973 and plans to restore it to its original Pace Car condition.

After completing its official duties, the 1972 OMS Pace Car was purchased by Joel Anderson from the Datsun Competition Dept. for $1.00 and Joel picked it up at Sears Point from Bob Bondurant in 1979.

Joel was Frank Leary's Crew Chief and later became a fellow competitor. Joel and Frank shared a shop together in Santa Clara for years. Joel was one of the competitors at Atlanta when Frank won the American Road Race Of Champions in 1978. The OMS Pace Car was later prepared for competition in IMSA's GT-U Class.

Joel Anderson sold the former 1972 OMS Pace Car to a friend that runs it in SCCA's GT-2 class now.

Pictured Below: Interestingly Joel prepared another Datsun 240Z to race, which was featured in the movie "Herbie Goes To Monte Carlo". Here you see Joel's Z sitting on the Pole at the beginning of the qualifying laps. {only in the movies - Herbie passes the Z on the last lap to qualify}

Pictured Below: The 1973 Datsun 240Z USAC Official Pace / Safety Car on the track at Michigan Raceway. Note the 1973 Pace Car was Red over White.

Pictured Below: The 1973 Official Pace Car at OMS.

Pictured Below: The 1973 Datsun 240-Z as USAC Official Pace / Safety Car on track in Milwaukee, Wisc. before the USAC Stock Car event. This is most likely the same car shown above at OMS, with altered signage, and sent to several USAC events around the country - but we don't know for certain. Note the full sun roof on this car.

Pictured Below: This is a photo of the O.M.S. Pace Car taken at the 1973 USAC Championships - contributed by Garry Savage. It is possible that OMS retained the 72 OMS Pace Car for use there in 1973. It is also possible that Gary just has the date wrong and the picture was taken there in 1972. TBD.

Click Here To See More: Of The Cars That Ran At O.M.S. and the Z Pace Car.

This beautiful 1974 Datsun 260-Z O.M.S. Pace Car now belongs to Cindy Unser. It was awarded to her father Bobby Unser as a result of his winning the 1974 USAAC Championship Race, the "California 500" at Ontario Motor Speedway. It is also interesting to note that Bobby, teamed with Tommy Smothers (of the Smothers Brothers) during the first OMS Pro/Am Celebrity Race - and they won that too!

Click here to see next page of Z Pace Cars.